Bigfoot Is For Real 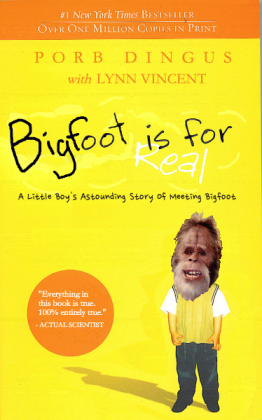 Bigfoot is for Real is the latest bestseller from acclaimed author Porb Dingus, a Nebraskan pastor who wrote the 2010 book Heaven is for Real, in which his 4 year old son, Flumbo Dingus, visited heaven during an emergency appendectomy. In Bigfoot, Flumbo undergoes another emergency procedure, and when he awakens, describes his meeting with the legendary Sasquatch – in stunning detail.

“Well, with the movie coming out so soon – April 2014, mark it down – we decided that this was the perfect time to release a new book,” said Porb Dingus in a recent interview. “We said, “Flumbo, we’re going to need you to get very sick again, so we can write about whatever you see while the doctors are operating on you.” So we moved him into a college dorm for a few weeks until he contracted bacterial meningitis, and boom, he meets Bigfoot. I mean, Bigfoot. Can you believe it? It’s already number 1 on the New York Times Best Seller list. Amazing.”

Critics believe the Dinguses have lied and scammed their way onto the bestseller list. Porb denies this. “Bigfoot is real,” he says, convincingly. The family has dealt with their fair share of criticism over the past few years, but Porb believes there’s nothing more Christian than benefiting from a son dying and then coming back to life. “If Jesus had met Bigfoot when he died,” he says, believably, “you can bet God would have included it in the Bible.”